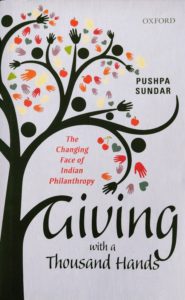 In her book, Giving with a Thousand Hands, The Changing Face of Indian Philanthropy, published earlier this year by Oxford University Press, Pushpa Sundar makes an important distinction between charity and philanthropy. She argues that while charity is alive and well in India, the country is short on philanthropy defined as altruistic giving on a large enough scale to bring about transformative social change.

A must read for all those concerned with contributing to and developing the social change and philanthropy ecosystem in India, giving with a thousand hands  presents the first ever coherent look at Indian philanthropy, its history, context, its role in society and social change processes, and what role does the Indian state play in promoting or restraining the act of giving?

Sundar outlines various measures that need to be taken to encourage philanthropy which she argues has a vital role to play in Indian society.  WINGS spoke to her about the book.

WINGS: When did you decide to write your new book, ‘Giving With A Thousand Hands’ and was there a particular incident that prompted you? 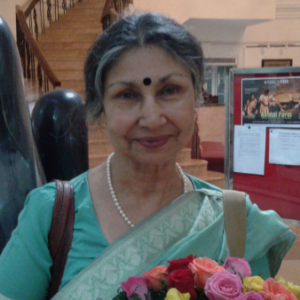 Pushpa Sundar: By the beginning of 2014 I had spent nearly thirty years studying  or promoting Indian philanthropy, and I felt that it was time to distil the learning  from this experience in a book on contemporary philanthropy.  In an earlier book, Beyond Business:From Merchant Charity to Corporate Citizenship ( 2000) I had looked at the evolution of ideas and practices of philanthropy in an historical context, but since then both the theory and pracice of philanthropy in India had changed perceptibly.

But two events were the immediate provocation. One was the statement of a foreign journalist reported in a newspaper who had said,“It was a pity that India’s  most active philanthropists were Bill Gates and Prince Charles, when it had so many billionaires of its own.” Why don’t they use their own money, he said,  to develop original ideas or help people solve their own problems, instead of donating mostly to Hindu temples.” Such a statement was simply not true, neither now or ever. Indian philanthropy has been around for over 1000 years, and though it is not as large or as dynamic as one would have wished, we have had many good philanthropists of our own who have done more than build temples. I felt I had to write a book which would dispel such erroneous notions.

The second proximate reason was the closing down in 2015 of Samapradaan Indian Centre for Philanthropy, which had been founded by me in 1996, and from where I had stepped down in 2005. I felt its work and what it had accomplished should be recorded as a valuable part of India’s philanthropic history.

There were other reasons too such as the phenomenal growth of wealth in India alongside an equally horrendous increase in inequality. Questions were being asked as to why  a country with so much wealth, technical know-how and management talent gave so little back to its own people, making them depend instead on  foreign donors. Finally,  Indian interest in philanthropy had been aroused by the visits to India of Western philanthropists such as Warren Buffet, and Bill Gates.

At the same time research on the topic was mostly by non Indians. I felt there was a need for an insider’s  perspective too. Hence the book.

WINGS: How far would you argue that India is a ‘special case’ with reference to the culture of giving? What lessons from India do you think can usefully be shared with the rest of the world?

PS: Every society’s culture of giving is unique in that philanthropy does not exist in a vacuum but is a function of the society’s history, culture, political and economic framework, taxation policies and so on.  And in most societies, that I am aware of, Western and south East Asian, giving is motivated by religious teachings as well as instinctive feelings such as compassion, pity, guilt or joy. The same is true of Indian giving and in this sense I would not say India is a special case, but is both different and similar because of a different configuration  of circumstances, and forces of globalisation.

As for lessons I would say that the single most important reason why philanthropy is not as high it could be in India , is the trust deficit and lack of integrity that people perceive in use of public money. Would be donors are not sure that what they donate would not be misutilised. So the first lesson is that philanthropy is limited by the lack of credibility of recipients and if one would increase it one must put in place measures  to overcome the trust deficit either by self regulation or state regulation, and values education.

A second lesson is that a public discourse on philanthropy contributes to raising the level and tone of philanthropy in a society. The first time there was such a discourse in India on charitable giving was in the early years of the 20th century It led to  charity being transformed from being ad hoc, religious charity limited to one’s caste, religion, and location, into a more secular philanthropy oriented towards social causes. Similarly,  the emergence of a discourse today is contributing to a more dynamic philanthropy. For such a discourse to arise there must be a strong infrastructure both initiating such a debate and contributing to it by providing credible public information based on good research; and a proactive media which gives space for such a discourse.

A third lesson is that tax policies play an important part in the level of philanthropy in society. When there was a high level of taxation on the wealthy due to government’s socialistic policies, giving in philanthropy was considered double jeopardy. On the other hand, tax incentives esp. for particular causes have played a part not only in increasing philanthropy but in directing it into desired national goals.

Finally, as I have stressed in the book, a sharp distinction needs to be made between charity and philanthropy, and people made aware of this distinction, so that they are motivated to give strategically for causes which will lead to transformative change, rather than to give to ad hoc ameliorative charity.

WINGS: How do you assess the level of development of philanthropy infrastructure in India? Do Indian philanthropists invest enough in building their field?

PS: The development of a philanthropy infrastructure is  in a primary stage in India and inadequate for the demands of promoting a vibrant philanthropic culture. There are only a handful of organizations doing the things that are needed such as research, advocacy , donor education, acting as bridges between donors and civil society organizations, and donor education. There is no national level, chamber like organization of donors to focus the country’s attention on philanthropy. Sampradaan was meant to do many of these things but unfortunately did not survive due to the many reasons I have outlined in the book, one primary one being that philanthropists in India do not consider investing in philanthropic infrastructure building important enough.

I have dealt with the need for such an infrastructure in my book, and cannot over emphasize the need for philanthropists to invest in this field if philanthropic giving is to make the impact it can and should.

WINGS: Is there a role for a global network of support organizations like WINGS to support Indian actors building a stronger ecosystem in the country?

PS: Most definitely. Not only should there be a network of domestic infrastructure organizations doing the kind of things that WINGS does, but it should also link up with WINGS- like organizations at the international level. Exchange of ideas, information and support are really very vital for movements to grow.

I was present at the birth of WINGS and contributed to its work in the initial years. Naturally, I am a great supporter of its work.

WINGS: Who did you specifically have in mind when you were writing the book- who would you most like to read it?

PS: Naturally all Indians primarily, but especially wealthy Indians. I want to convince them of the need for philanthropy and its benefits, because social need is great in India. But I want philanthropy to go beyond meeting social need and deprivation and to contribute to progress by backing innovation and talent. In this sense I want Indian philanthropists to contribute also to global change and progress.

I also want university students everywhere to read it and to contribute to further research. I want policy makers to read it so that they can create a conducive environment for the practice of philanthropy;  and civil society organizations too who are working on the frontline of change, in order to understand the ecosystem and how to get the best out of it.

Finally, I want all those interested in philanthropy globally, especially academics, global civil society and foreign media to read it so that they can make informed statements about it, and form global partnerships.

This interview was first published on the WINGS blog, https://philanthropyinfocus.org on August 28, 2017

Pushpa Sundar is a development specialist and was the Founder Director of Sampradaan Indian Centre for Philanthropy, New Delhi, India. She is the author of Business and Community: The Story of Corporate Social Responsibility in India (2013) and Foreign Aid for Indian NGOs: Problem or Solution? (2010).