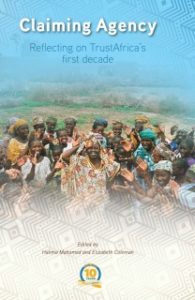 Published in celebration of TrustAfrica’s 10th anniversary, Claiming Agency: Reflecting on TrustAfrica’s First Decade takes an in-depth look its work as an African-led foundation that set out to do things differently. Edited by Halima Mahomed and Elizabeth Coleman, the book has been published in partnership with Weaver Press.

Founded in 2006, when solutions to Africa’s challenges were often developed outside its borders, TrustAfrica sought to practice a kind of philanthropy that both benefits Africans and actively supports their agency.

Now, at TrustAfrica’s ten-year mark, Claiming Agency asks, does this kind of philanthropy make a difference? If so, how? What are its unique ways of working?

The answers are found in five chapters by independent authors that reflect on how TrustAfrica and its partners advanced a range of issues – from women’s rights, smallholder agriculture, and democratic reform in Liberia and Zimbabwe to international criminal justice and illicit financial flows.

Three additional chapters analyze the changing landscape of African philanthropy, discuss the book’s findings, and examine their implications for future philanthropic work in Africa. As a whole, the book adds important evidence of the unique value of African-led philanthropy.

In a clear-eyed look at money and power, the authors observe that donor funds all too often come with strings that constrict African agency – and recommend ways in which donors from Africa and the global north can foster independent action and strengthen movements for change.