By Sarah Bahn and Avila Kilmurray

It is not every day that the iconic ‘Free Derry Corner’ landmark turns bright pink. But this is what happened as a result of a small £3,000 grant awarded by the Community Foundation for Northern Ireland (CFNI) to the Rainbow Project, which works in Derry/Londonderry in Northern Ireland. The pink wall, and the social change that accompanied it, show the difference a small grant can make in challenging accepted attitudes.  Additional mentorship and support by a foundation can significantly augment the impact of the money awarded. In this case, the work of the Rainbow Project’s LGBT activists sparked both visible and systemic accomplishments, laying the groundwork for greater inclusivity throughout Northern Ireland.

While Northern Ireland was shifting politically in the 1990s as the 30 years of violent political conflict known as The Troubles came to an end, social attitudes showed little sign of change. Homosexuality was not decriminalized in Northern Ireland until 1982, and extreme homophobic violence continued into the 1990s, with insufficient police response to address the problem. The Rainbow Project was established in Derry in 1994 to promote the health and well-being of lesbian, gay, bisexual, and transgendered (LGBT) people. The Rainbow activists continually faced discrimination, prejudice, and abuse. When a study showed that young Irish gay men were 30 times more likely to commit suicide than their heterosexual counterparts, apathy was no longer an option for philanthropy.

The Belfast (Good Friday) Agreement of 1998 had promised a Bill of Rights for Northern Ireland. At CFNI, we established the Bill of Rights Fund with the help of Atlantic Philanthropies to encourage local groups and communities that had faced marginalization to play a key part in framing the fund. The fund had two components: a small grants program (up to £10,000) for groups to carry out their own initiatives around the Bill of Rights, and a training and support program which provided mentorship for groups to help with self-reflection and action plan development. The Rainbow Project received a grant from the CFNI Bill of Rights Fund in 2006. 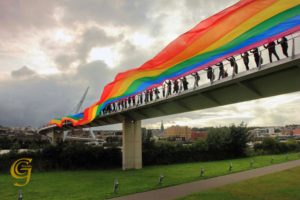 The Rainbow Project used its program grant to re-establish the Foyle Pride Festival in 2007. They successfully negotiated to paint the famous ‘Free Derry Wall’ bright pink to celebrate the occasion. This caught local media attention, with the BBC reporting, “Free Derry is pink with pride’’. I had experience in bringing marginalized groups of people together, and so the peer exchange element of the program was a powerful opportunity for the Rainbow Project to build relationships with diverse groups, including political ex-prisoners, people with disabilities, minority ethnic communities, and largely single-identity Protestant/Unionist/Loyalist neighborhoods. Stereotypes were challenged and prejudice confronted. The discussions led to the development of an inclusive approach to the proposed Northern Ireland Bill of Rights that specifically addressed the rights of the LGBT community. Finally, internal reflection encouraged by the CFNI mentor led the Rainbow activists to identify and respond to power imbalances within their own organization, such as a lack of representation of the lesbian community.

The Rainbow Project continues to expand its work, focusing on issues like homophobia in schools. CFNI still funds local initiatives with a human rights focus and has developed a Power Analysis toolkit to accompany its grantmaking in this field. Homophobia has not been eliminated in Northern Ireland, but improvements have been made to increase awareness of the issue. When the annual Foyle Pride Festival takes place in Derry/Londonderry these days, even the city council Guildhall clock is blushed with a pink light in recognition of the local LGBT community. This is the legacy foundations have the power to leave with small, thoughtful investments in marginalized communities.

Avila Kilmurray was executive director of the Community Foundation for Northern Ireland from 1994 to 2014. She is currently an independent consultant with the Social Change Initiative.

It is the fifth in a series of 11 posts being released by the Working Group on Philanthropy for Social Justice and Peace and GrantCraft, since September 2016.