By Sarah Bahn and Hania Aswad

‘Al Ouneh’ is a type of informal, collective philanthropy led by community members to help individuals or the well-being of the entire community. The concept has been practiced in the Middle East and North Africa for generations. Al Ouneh can be used in a number of ways, such as to support neighbors with the costs of their child’s education, to help a community build a school, or to increase olive harvesting. This “give what you can” mentality is one of the region’s cultural assets and a successful form of community philanthropy.

The use of al Ouneh has declined over the past 20-30 years. However, an informal youth group, inspired by Naseej’s working principles and approaches, wanted to revive this concept and revitalize the collective giving mentality in their communities. ‘Ilna’ Youth Group meaning ‘Ours’ in English, responded to the Naseej Foundation’s request for proposals with a project called “al Ouneh.” In many ways, Ilna was not an obvious choice for funding for most donors. They had no structure, no budget, and no interest in media coverage. Moreover, their concept note didn’t specify either the location/community or the types of activity the project would carry out. The project budget was no more than a tentative figure followed by some brief remarks indicating that the funds would mostly be spent on activities. 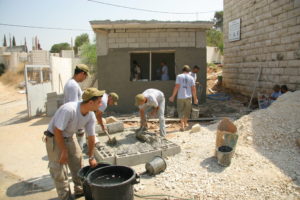 Yet we funded them because one of Naseej’s working principles is to support projects that underpin strong values and organizations, and groups that possess a good reputation and strong competencies which usually go unnoticed by most mainstream donors. We took a chance on Ilna because of the principles that their project embodied, which were to engage stakeholders and enable them to gradually take the lead and the ownership of their own development. From our experience from working with many other informal youth groups, we knew that Ilna members would be a powerful force for social change in their community.

Once the location was selected, Ilna group members worked on building a solid relationship with the village community leaders and members. They demonstrated a deep respect for the local community and its institutions, and valued their voices in order to gradually develop community ownership and, crucially, encourage the local leadership to gradually and fully take over. Together, they conducted a rapid needs assessment and identified a project that was truly fit for a revival of al Ouneh.

By combining Naseej Foundation’s expertise in funding innovative projects with Ilna’s passion and desire to revive an old cultural practice, we succeeded in building a new classroom to help local girls finish their education safely. Through the practice of al Ouneh, Ilna engaged dozens of young people to complete its project. The village took ownership of the project, reintegrated a traditional form of giving into their community, and helped hundreds of girls to date to complete their secondary education in safety. And for us at the foundation, it reinforced our faith in community leadership as the most effective method of social change.

It is the seventh in a series of 11 posts being released by the Working Group on Philanthropy for Social Justice and Peace and GrantCraft, since September 2016.