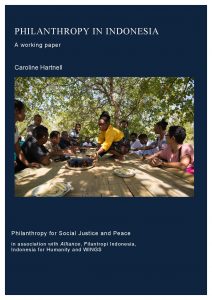 This report on Indonesian philanthropy is part of a larger study by Philanthropy for Social Justice and Peace (PSJP), started in 2016, to review the current state of philanthropy in emerging economies and the role philanthropy is playing in the world today. This is the fifth report from the study.

Like the other reports, this is not a full-scale statistical survey of Indonesian philanthropy; still less is it a once-and-for-all summing up. Instead, it aims to throw light on current developments in, obstacles to, and possibilities for philanthropy in Indonesia, especially highlighting innovations and new initiatives. This has been done partly through looking at existing research, but mainly through a series of conversations with people who have been trying to promote, support or strengthen different areas of philanthropy in the country.

The areas covered include various forms of giving by the wealthy, including corporate philanthropy and family foundations. It looks at the growth of social enterprise and impact investing. Perhaps most interestingly, it looks at faith-based philanthropy and media philanthropy, both growing areas supported by individual giving, and more widely at giving by ordinary individuals and the potential therein for social justice philanthropy.

This study is neither exhaustive nor complete – so the report coming out of it should be considered a working paper, a work in progress, not a finished product. We hope that others reading the report will comment, disagree with it and add to it, perhaps publishing other working papers that might fill in the gaps.

Caroline Hartnell is the author of this report. It is published by Philanthropy for Social Justice and Peace in association with Alliance, Filantropi Indonesia, Indonesia for Humanity and WINGS. A summary of the report is available in both English and Bahasa Indonesia.

To comment on findings or engage in a conversation about this report, please write to us at info@psjp.org.